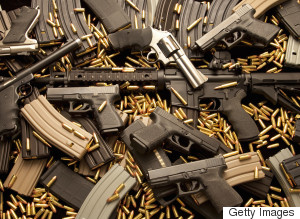 Sixteen people were killed and 82 were shot in Chicago over the July 4th weekend. The LA Times reported:

[Many of the shootings, which began about 3:30 p.m. Thursday, took place in some of the most violent South Side neighborhoods. Five people were reportedly shot by Chicago police, including two who died. The higher death toll was reported Tuesday by the Chicago Tribune.

Chicago has become the poster child for urban violence, fueled by gangs and involving drive-by shootings or attacks from cars on other vehicles. People of all ages have been shot on streets and in some cases while sitting on their porches. The weekend carnage is the greatest spate of gun violence so far this year, theChicago Tribune reported.]

[The homicides bring the city’s total for the year to 80, nearly double the number the city had reached by this time last year, Journal Sentinel records show.

Most of the homicides that are occurring in the nation’s larger cities are committed by gang members; According to Policy.Mic, gang members are responsible for 48% of the violence in some cities, and as much as 90% in others. The website reports:

[The FBI’s 2011 National Gang Threat Assessment report states that there are 1.4 million active gang members comprising more than 33,000 gangs in the United States. Gang violence is a serious issue significantly contributing to violent crime, including homicides. Gang membership is rapidly increasing; the 2011 report indicates a 40% growth in gang membership since the 2009 report.]

GUN CONTROL IS NOT THE ANSWER:

Stricter gun control laws have little, if any, impact on the number of murders that are being committed each year in our cities. For openers, it is rare to find a gang-related murder case where the shooter even bothered to legally carry a gun; in fact, most of the weapons are stolen, or purchased on the street, often without any identification features displayed on the weapon, such as a serial number. The primary cause of the violence continues to be connected to drug addiction and lack of discipline from parents. Increased criminal sentences for weapon-related offenses have proven to have little or no impact on the homicide statistics. While poverty also continues to play a major role in city homicides, drug education and treatment is the key element for curbing much of the violence. Many courts across the country have established specialized drug courts where the emphasis is on getting an offender off of the streets and into a treatment facility as soon as possible. Such courts are proving to be very effective at reducing recidivism of criminal acts, and at the same time, keeping guns out of the hands of gang members.