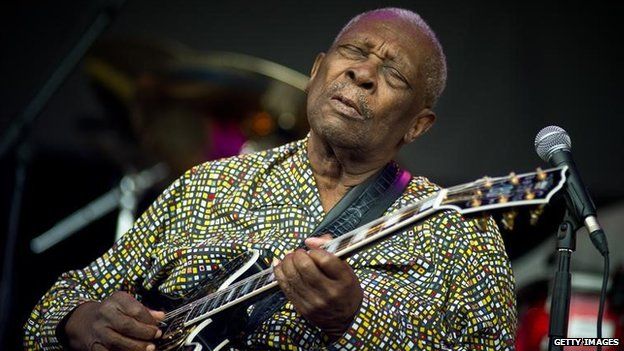 BB King, commonly known as the “King of Blues” died in his sleep today at the age of 89 in Las Vegas. The legendary musician was born in Mississippi and picked a guitar with the best of them- once ranked as the third best guitarist of all time according to Rolling Stone magazine. The great Buddy Guy said about him, “He was the greatest guy I ever met”. King has received  15 Grammy awards and was inducted into the Rock and Roll and Blues Foundation Hall of Fame. He was born September 16, 1925 on a cotton plantation in what is now known as Itta Bena, Mississippi. He had often sang in church choirs, and once played on street corners for dimes. He was honored by several Presidents in his life time. He made Beale Street in Memphis famous calling his group the “Beale Street Boys” later shortened to BB. His first big hit was “Three O’clock Blues released in 1951. He named his guitar “Lucille” over an incident involving a fire at a dance hall caused by two men fighting over a woman named Lucille. His trade song was “The Thrill is Gone” for which he won a Grammy in 1970.