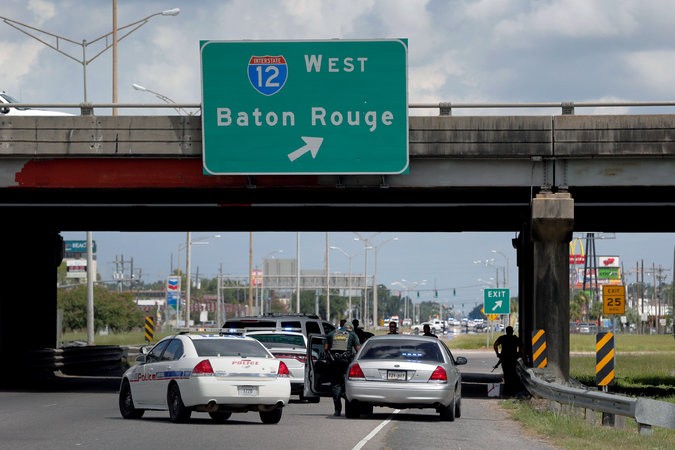 Multiple police officers, as many as seven, were shot in Baton Rouge, LA early today (roughly 9 am this morning) and three of them are likely dead. According to local reports, more than one gunman was involved in the shootings, and one of them has been killed. The scene now appears to be contained, however, a spokesman for the police department, said “we don’t know” exactly what happened, “we are working the scene.” He said multiple agencies are at the scene, and the police are using a robot to check for explosive devices on or near the body of the dead suspect.  He did not elaborate on the possible motives of the shooters. He made reference to one of the shooters involved appeared to be wearing dark military-style garb. As usual, in breaking stories of this type, information changes rapidly. The shootings took place near the Baton Rouge Police Headquarters. Entire sections of Interstate 12 in the city were blocked off shortly after the deadly shooting spree. The mayor of the city, Kip Holden, immediately called for calm and order urging the citizens to reach out to one another to create more dialogue and to resist “retreating into a shell” and attaching blame.

Holden has been subject to substantial criticism over his behavior following recent shooting incidents involving the police. Following the shooting death of Alton Sterling, on July 5th by the police, the mayor was a no-show at Sterling’s funeral.

UPDATE: July 17, 2016, @ 4:30 CST– BATON ROUGE– The shooter has been identified as Gavin Eugene Long (29), a black man from Kansas City, Missouri. Various news organizations are reporting that Long had an affiliation with radical groups including the “New Freedom Group” and the “Sovereign Citizens.” He apparently was killed during a shootout with the police.

President Obama spoke to the nation and said: “Attacks on police are an attack on all of us.” He then said, “Most of all, our prayers go out to the families of the officers.” In a thinly veiled attack on Donald Trump, he warned that “We don’t need inflammatory rhetoric thrown around to fulfill an agenda.”