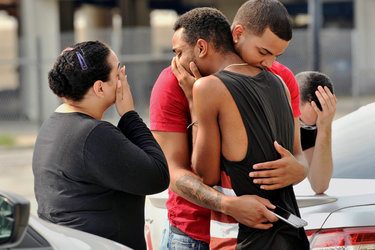 The gunman in the Orlando shooting, leaving 49 people killed and 53 wounded at a crowded gay/LGBT nightclub in Orlando, Fla., early Sunday morning, has been identified as Omar Mateen. He was armed with an assault rifle and a handgun and is from Port St. Lucie, Florida. His parents are from Afghanistan. His girlfriend has said that he was a violent man. Mateen’s name has been the focus of FBI investigations in the past- he was on ISIS sympathizer watch list. He worked in the private security guard business and was able to fire and legally purchase the type of firearms used during the deadly assault legally. The gunman had swore allegiance to ISIS in the past according to CNN.

Meanwhile, a man was arrested in SantaMontica, California near a gay pride event and was found to be holding a large arsenal of weapons. No immediate connection between the events has been established. Security is also being beefed up in Washington D.C. and Minneapolis, Mn– an area with a large gay population.

Mateen had apparently arrived at the Pulse nightclub in a van where he initially engaged a police officer/security person at the club in a brief gunfight. He then entered the club where he held about 30 hostages. Police eventually stormed the building and killed Mateen.

It is unclear whether Mateen was inspired by ISIS or if the terrorist organization was directly involved– presently, there is no indication of direct involvement. Politicians and candidates seized on the tragedy to barked out their tough positions on radical terrorism.  Trump and Clinton.  Tweeted “When will this stop? When will we get tough, smart & vigilant?”; meanwhile, Hilliary Clinton said,   Woke up to hear the devastating news from FL. As we wait for more more information, my thoughts are with those affected by this horrific act.”

PresidentObama called the case an act of terrorism committed by a “person filled with hatred.” This could have been anyone of our communities, and we will be there for the people in Orlando, the President said. This is an especially heartbreaking day for our gay friends and a sobering reminder that an attack on any American is an attack on all of us. Today marks the most deadly shooting in American history. It serves to remind us how easy it is to for someone to get their hands on a handgun, the President said.