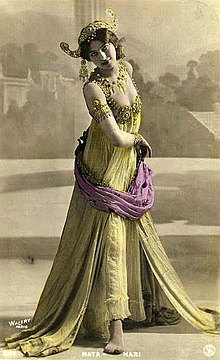 Mata Hari was convicted of being a spy in France and executed.

In a typical reactionary fashion, the Socialist government of France passed an intelligence-gathering law that was essentially drafted three days after an attack in Paris that left 17 dead in the lower Parliament. The measure passed by a 438 to 86 margin, and gives almost exclusive power to the government to conduct massive spying on anyone, including tourists. Although the Senate must still pass the bill before it becomes law, most agree that it will pass there as well. The country’s constitutional council will also review it. The government is defending the law saying it is needed to combat terrorist threats. The French government has obviously chosen to ignore the revelations spawned from the passage of the “Patriot Act” in the United States. The Socialist majority, frightened as they are, have opted to surrender their liberties and live with the intrusiveness that is virtually guaranteed by the scope and expansionary details of the liberty-chilling law. The law permits the government, without meaningful judicial review, to listen to cell phone conversations, read emails and force internet providers to turn over any information they request. It is sad times for civil libertarians in France. One prominent official, the head of the Paris lawyer’s bar, Pierre-Oliver Sur, called the law a “state lie”, and fears that the government will use the power to monitor any behavior the government chooses to. Meanwhile, some countries, such as Germany fear measures that extend the central government too much surveillance power, particularly in the wake of the Edward J. Snowden leaks that highlighted government abuses and startled many citizens around the world. Some members of the United States Congress and Senate are on the verge of paring the government’s surveillance powers and attempting to reign in the National Security Agency’s vast reaches. Strangely, it is the conservative politicians like Mitch McConnell (R-Ky.), Ted Cruz (R-Texas), and Mike Lee (R-Utah), who strongly support the Patriot Bill in the U.S.,  while the left-leaning Socialist of France favor their surveillance law. Many citizens of either country, who support these intrusive laws, are simply willing to give up their right to privacy because they are petrified of potential terroristic assaults. Others believe there have always been laws in place, prior to the passage of these expansive bills, which adequately safeguard the interests of the public. It is on the later basis, that legislators are attempting to prune or eliminate the provisions of the Patriot Act. These issues will likely heat up during the 2016 election in the U.S. Expansive laws, which threaten the liberties of citizens, are not new in the U.S. When the government decided to go after the Mafia in the late 60’s and 70’s, broad conspiracy and so-called RICO statutes were enacted- many remain in place today even though the Mafia has essentially been eradicated. Under the Nixon era, expansive drug laws were put in to place during his “War on Drugs” campaign- many are still on the books. Some of these laws have been pared back over time, as the immediate threat that prompted the need for them seemed to lessen in the minds of the general public. However, cyber-crime and terrorists are very much on the minds of many citizens these days. While few people question laws that permit surveillance, many feel that judicial over-sight is always needed, and that many of the laws, passed shortly after 911 went too far. It is a question of fairly balancing a citizen’s privacy interest and the government’s actual need to possess such powerful tools. France has went way too far.

A federal appellate court has ruled that the NSA does not have the sweeping authority to collect and store metadata on U.S. telephone calls made by citizens who are not a target of an existing investigation. In a 97-page ruling the court called the collection of such data illegal. The NSA has been using orders obtained from a court called FISA to collect mass quantities of private phone records. The ruling comes at a time when congress is deciding whether to trim NSA’s powers derived from the USA Patriot Act.

UPDATE: May 13, 2015: The U.S. House passed the USA Freedom Act 338-88. The Act brings substantial reform to the vast and out-of-control NSA spying operation in the country. The Patriot Act presently in effect, is set to expire May 22nd. The passage of the measure now goes to the U.S. Senate where it will face stronger opposition from lawmakers who feel that the pared down provisions in the new bill will handicap the NSA, although these proponents of the existing law have been unable to articulate how and why the new bill would harm the country.  One Republican, Ted Cruz of Texas, and a Presidential contender, said “We have an obligation to protect the constitutional rights of every American”, and the USA Freedom Act was “the right thing to do”. The odd man out is Senator Mitch McConnell (Rep-Kentucky)  who would like to see the NSA’s powers strengthened- few lawmakers support this extremist position. Odds are that the USA Freedom Act, or a close version thereof, will pass the Senate.