FRENCH HORROR, CIVILIANS KILLED BY TERRORISTS: IS IT TIME FOR BOOTS ON THE GROUND? 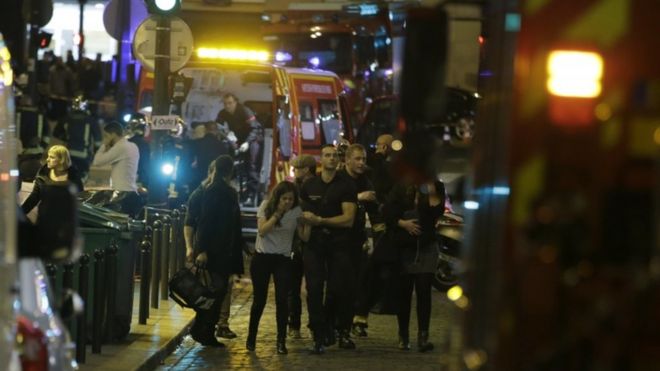 Attacks in Paris have claimed the lives of at least 130 civilians. Over 352 have been wounded, some very seriously. These numbers are likely to increase as the investigation continues. At least seven militants were either killed or committed suicide in multiple locations. It appeared from the start to be an organized attack by Islam radicals, and recently, ISIS released a statement claiming responsibility for the murders. according to the jihadist monitoring group SITE Intelligence. The attack sites included the Bataclan concert arena, the Stade de France, St. Denis soccer stadium and several restaurants. According to some witnesses, the gunmen killed many of the people “execution-style”. One American college student was among those killed.

One World Center building in New York displayed the colors of France in an act of solidarity.

French President, Francois Hollande declared a state of emergency and said “Our fight will be merciless” against those responsible for these vicious attacks. President Obama said, “This is an attack not just on Paris. It’s an attack not just on the people of France. But this is an attack on all of humanity and the universal values we share”. The U.S. Justice Department has said that they did not have any advance evidence of the attacks. Iran leaders condemned the attacks as well as leaders from most other countries.

France has spent hundreds of million of Euros to update and increase security measures over the past year. The increased security methods have been resisted by civil liberty groups. Up until today, the French borders were open– but security has been substantially increased at the borders since the attacks. The government is expected to step aggressively up policies regarding the flow of immigrants into the country, as well as beefing up security throughout the country.

ISIS enthusiasts run with the passion of a new crusade, with the mindset that only they are fighting for a just and righteous cause. When such fervent believers are prepared to blow themselves up for their cause, they are not unlike the Kamikaze pilots during World War II and are tough to stop. Their mission is not to capture ground and keep it, as is usually the case in conventional wars, rather, they are trying to cause Muslims to pick sides– them or us. The problem is, how can the world protect themselves from these terrorist attacks? The coordinated military efforts against ISIS in Syria can go only so far towards the goal of stopping them, absent intense bombing missions– a move that carries with it substantial direct and collateral damage and enormous ethical dilemmas. The usual solution propagated by politicians and law enforcement people in the U.S., and other countries, is to beef up their military and secret technological efforts. In many ways, ISIS sympathizers are invisible and easily migrate across borders, and significantly, there is not a base or country that can be eliminated. About 70 ISIS followers were arrested in the U.S. alone this past year. The recent bombing of a Russian plane and the attacks in Paris, even as the bombing in Syria has dramatically increased, suggests that ISIS has many heads. The ideological basis of the warring religious factions in Syria and other countries adds to the ardent commitment of the followers of these radical sects. It is not clear what efforts have been made by the U.S. and other countries to help these religious factions reconcile their differences, but if such efforts are a matter of record, they have obviously failed.  In some ways, it would appear to make sense to simply let the factions fight their own battles; crudely stated, let them kill each other. The problem is, the murderous actions of these factions spill over to the soils of other countries. An added problem is, who do we support? The U.S. track record has not been good when it comes to dismantling despots only to have them replaced by radical sects. This argument is being made about our presence in Syria. But if we cannot be sure who to support, and if terrorists are continuing to kill innocent citizens around the world, what can be done. A possible solution would be for the U.S., along with our allies, to dramatically increase our military efforts in Syria to gain control of the country. Such an effort will require increasing bombing and thousands of “boots on the ground”. Once insurgents get off of the roadways and do not cluster together, bombing is not sufficient.  Once Syria is under the full control of the coalitions, efforts can then be made to bring the warring factions to the bargaining table. Those disgruntled and avid supporters outside the country would then have no battles to wage. A military endeavor of this magnitude is a costly and lethal solution, but it may be what is needed now. Coordinated airstrikes alone, have not been doing the job. As a caveat, what we do not need in the U.S. is more surveillance laws (pertaining to emails, phones, etc.) that have been determined to invade the privacy of American citizens.

A Virginia mom likened CRT to China’s Cultural Revolution, a…

Back to Health: Making Up for Lost Time is a live virtual…

Mara Gay’s concept of “whiteness” and her alleged distorted…