The extremist group “Boko Haram” has apparently killed hundreds of civilians in an attack on a village during which they pretended to be members of the Nigerian army there to help; they arrived at the scene in military-style pickup trucks and motorcycles shouting “We are here to protect you all” –then proceeded to murder the civilians according to the BBC. Local politicians claim the army had been warned of the potential attack and did nothing to help. The attacks over the last few days have been near the Mandara Mountains close to Cameroon in Danjara, Agapalwa, and Antagara. The terrorist group primarily operates in remote areas believing the Nigerian army will not go there. The group’s strength seems to be located in the northern states of Borno, Yobe, and Adamawa. There have been reports of army generals aiding the militants.

The group is believed to be still holding hundreds of schoolgirls who were kidnapped from the remote village of Chibok this past April. One leader of the group has threatened to sell the girls into slavery premised on the ancient Islamic belief that woman captured during the conflict are part of the “War Booty.” Of course, most followers of the faith do not subscribe to such ancient beliefs.

Boko Haram has been waging a bloody conflict since 2009 against the army in an attempt to establish an Islamic state in Nigeria. It appears that the leaders and followers of the group believe it is a “haram” (forbidden) for Muslims to take part in any political or social activity tied too closely to Western society including individual styles of dress, participating in free elections, and receiving a secular education. They believe the country is currently being run by non-believers although the country has a Muslim leader.

Nigeria’s President, Goodluck Jonathan continues to be criticized for not visiting some of the remote areas where the insurgent activities are taking place and for accepting Western aid in the form of surveillance and intelligence assistance. Some of his opponents believe his willingness to reach out for help signals a sign of weakness on the part of the Nigerian army.

COMMENT: The world’s focus should be on rescuing the kidnapped girls and returning them to safe schools where they can learn for themselves and formulate opinions based upon their knowledge about their own lives- safely. This story should not be all about the ancient beliefs of cultures and the pretension that all who share a general view subscribe to the actions of a few extremists- especially when to do so solely promotes the political agenda of another. The kidnapped girls are of immediate concern.

UPDATE: February 5, 2015 (See UPDATES in the COMMENT SECTION below as well). Boko Haram extremists attacked civilians, burned houses to the ground, set fire to a mosque and killed nearly 100 civilians in the “Republic of Cameroon” in the border town of Fotokol this week. There are reports that the terrorists slit the throats of some people. Plans for a multinational force to fight the militants, consisting of up to 7,500 soldiers from Nigeria, Cameroon, Chad, Niger and Benin are moving forward. The violence is expected to intensify as the February 14th election grows closer.

UPDATE: February 11, 2015 (See UPDATES in the COMMENT section below as well). The elections scheduled for February have now been postponed until March 28th because of security problems caused by the Boko Haram extremists according to Nigerian authorities. The election between the incumbent, President Goodluck Jonathan and his challenger, Muhammadu Buhari, are said to each be running with 42 percent of the vote. Both candidates have been widely criticized by regular citizens of Nigeria; Goodluck, mainly for his incompetence, and Buhari, for his shaky history of human rights violations. Some villagers, particularly in rural parts of the country, have started to side with Boko Haram loyalists for these reasons. The U.S. does not seem to have a detailed and clear policy on these matters according to many observers. Secretary of State, John Kerry, who recently visited the country, said the U.S. is “deeply disappointed” over the postponement issue; but it is unclear what action, if any, the U.S. will take to assist in the matter. Meanwhile, Nigeria’s National Security Adviser, Sambo Dasuki, has recently said “All known Boko Haram camps will be taken out. They will be dismantled in six weeks. Meanwhile, many villagers, most of who are poor, confused and yet proud, are not so sure.

UPDATE, MARCH 22, 2015: IS THE TIDE TURNING AGAINST BOKO HARAM?  According to the bold words of Goodluck Jonathan, the tide is turning in his country where he claims to have forced Boko Haram terrorists to be on the run. Many of the country’s citizens are not so quick to share his optimism.

Technical problems with some card readers caused the Nigerian electoral commission to postpone voting in the country; about 300 polling units out of 150,000 were affected. This problem, along with the violence caused by Boko Haram extremists who just killed 41 people, has caused frightened potential voters to stay away from the voting areas. Nearly 60 million people have cards to vote. It is not known how long these factors will delay the voting process; some voting is expected to resume today. 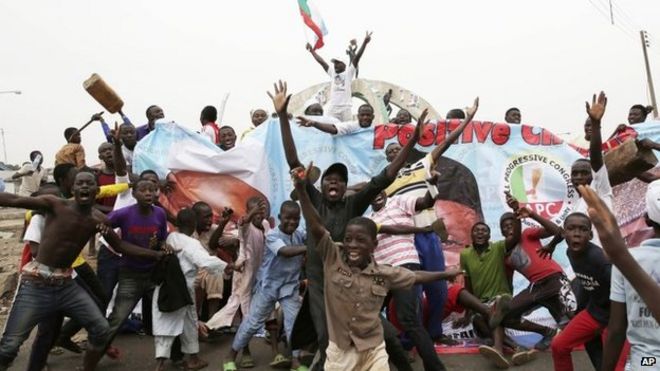 Muhammadu Buhari defeated Goodluck Jonathan in the presidential race, the first candidate to unseat a sitting president since the country  gained independence from Britain in 1960. The latest vote totals had Buhari with 15 million votes and Jonathan with 12.8 million votes. Allegations of fraud and concern over Buhari’s past practice of ruling with an iron hand have continued to cause protests in the country. The role of Boko Haram is expected to impact Buhari’s rule.

The Nigerian army has announced that another 234 women and children were rescued from the clutches of Boko Haram terrorists. Around 300 were freed by the army earlier this week. The army has not said, and it is unclear from other sources, whether any of those freed this week, include any of the girls kidnapped from the school in Chibok in April of 2014. 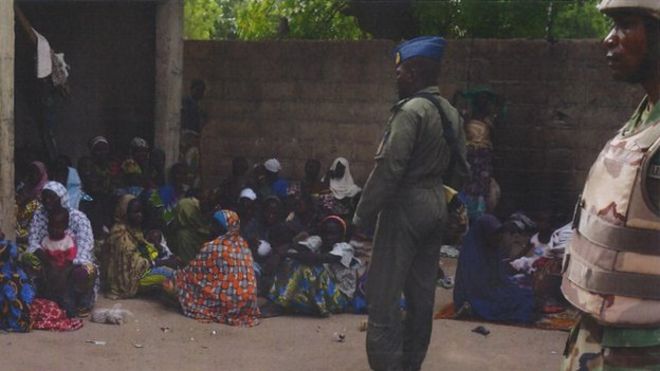 Some of the former captives are depicted in this photograph according to the Nigerian Army.

UPDATE: 5/19/15: Boko Haram radicals have been raping women by the dozens in an apparent attempt to impregnate them so that their seed produces a dominant population for generations to come. Women and girls have been rounded up and given to Boko Haram fighters for marriage. Many of the women who have managed to escape these arranged and forced unions have been showing up, often battered and pregnant, at a displacement camp established near the Borno State capital, Maiduguri. The population of the camp has surged to over 15,000, and a significant percentage of these people are women and girls who have been subjected to these acts of sexual abuse and forced unions. Some have contracted diseases. The Nigerian military has been viewed with suspicion by many villagers, and have been unable to force the rebels from the country.  One reporter has detailed his arduous efforts when reporting on these matters. It is clear that the government is not keen on journalists who are attempting to obtain the full story there.

An Iowa jury has convicted Cristhian Bahena Rivera of first-degree murder in the 2018 death of 20-year-old University of Iowa student Mollie Tibbetts,