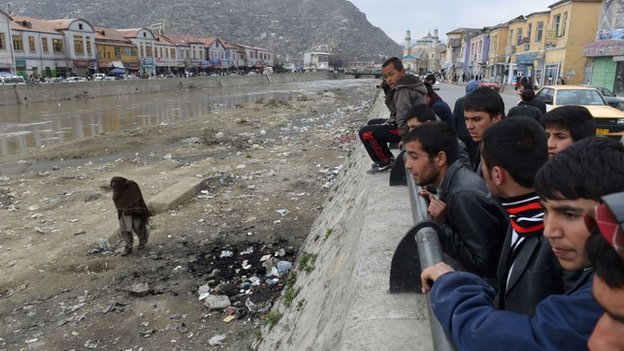 The black area marks where the mentally ill girl was burned

A 27-year-old woman was stoned, beaten, lynched and tossed in a river by an angry mob in Afghanistan because they thought she had intentionally burned a copy of the Koran according to the local police commander, Saleh Mohammad. However, the girl’s parents said she had been mentally ill for 16 years and did not intentionally burn the book. Footage of the video shows grown men punching and kicking the hapless woman in broad daylight. Local police have arrested at least four suspects.

The woman has since been identified as  Farkhunda, and hundreds of women have attended her funeral and demanded that her killers be punished for the cowardly and brutal attack on the mentally ill young woman. Afghan President, Ashraf Ghani said he has ordered an investigation into the killing. Meanwhile, millions of people worldwide have expressed their outrage over the senseless murder. At the funeral, women carried the coffin, breaking the sexist tradition of men performing that function. General Mohammad Zahir has declared that Farkhunda was “totally innocent”- 13 people, including 13 police officers have been arrested so far- the total is expected to grow.

Following the mob’s senseless killing of Farkhunda, many citizens are treating her as a martyr,  and people are calling for the public execution of those responsible for her death.

UPDATE: 5/6/15: Four Afghan men were convicted and sentenced to death to death for their participation in the beating and killing of  Farkhunda. Eight other men were sentenced to 16 years in prison and 18 others were found not guilty. The fate of 19 policemen, who may be guilty of failing to intervene in the vicious attack, will likely be decided by Sunday. Although many members of the mob believed she had burned the Koran as she argued with a peddler of charms over the practice of selling them to women at the Shah-Du-Shamshaira shrine, officials say there was no evidence that she had burned the sacred book. The peddler was one of those condemned to death. Many in the country believe the court systems in place are corrupt and that officials were reacting to worldwide criticism of the senseless murder. Meanwhile, violence against women remains rampant in the country. It is unknown whether any of these decisions will be appealed, or later revised, after the widespread publicity has subsided.