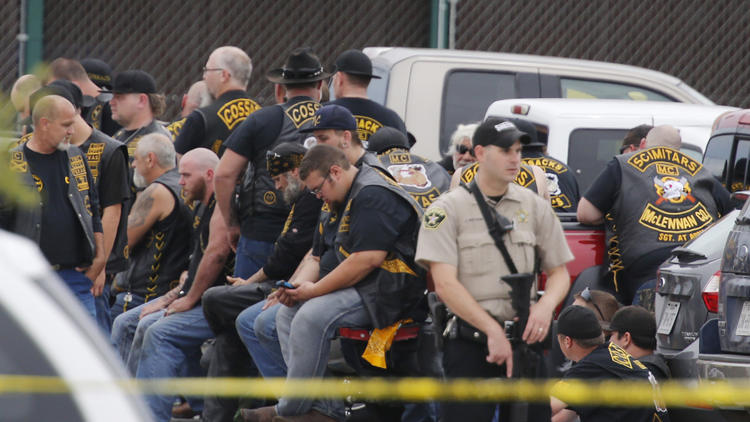 Three rival biker gang members collided at a restaurant Sunday, and nine people ended up dead. Waco, Texas police, and state troopers were at the scene as the trouble developed between the bikers. The deadly melee started out with verbal arguments, escalated to physical fights, then shootings. The scene quickly turned chaotic as gang members fired at one another as others used chains, knives, and other weapons. Ultimately, the police used their guns as well; no officers are reported to be injured. The incident mainly occurred at the Twin Peaks Restaurant in the Central Texas Market Place, although reports concerning an event at the Waco Convention Center were circulating. Police were apparently aware of the potential confrontation and had been working with the restaurant owner according to some local reports. Two local groups had been feuding locally, and then backup gang members started arriving from the Dallas area. Although the names of the rival gangs have not been officially identified by the police, locals say some are members of the “Bandidos” and “Cossacks.” It is estimated that over 100 weapons were located.

Up to five biker clubs were involved in the fight that initially started over recruitment and parking space issues.

UPDATE: 5/18/15: Police have charged approximately 170 people involved in this shootout. The charges include crimes that are linked to organized crimes committed for the purpose of murder. Some of these charges are considered “capital” and are technically punishable with the death penalty. Bail is being routinely set at $1 million. Of course, it is way too early to determine what the possible charges will be, and in cases of this nature, lawyers for those charged may have good self-defense arguments. Also, it is not clear what video, if any, exists that may capture footage of the crimes as they are occurring. Moreover, members of biker clubs are not known for cooperating with the police, although snitches are not unprecedented in the biker world. A major case in Minnesota, saw the ex-Minnesota president of the Hells Angels, roll-over on his associates in exchange for a reduced sentence. The Waco cases will likely be sent to a grand jury for consideration of specific charges.

The feud may have involved as many as five different motorcycle clubs. However, the major disagreement appeared to have involved members of the “Cossacks” and “Bandidos,” who are rivals. Both clubs are well established and date back to the 60’s, although the Bandidos appear to have a larger presence in Texas. The deadly melee likely was related to the fact that some members of the Cossacks were wearing “bottom rocker” banners of Texas on their vests or jackets signaling their intent to lay claim to the turf in Texas, an area already claimed by the Bandidos, although both clubs originated there and had had ongoing serious battles over other matters. There was some talk that a “coalition,” consisting of members from the various clubs, where there  to iron out discrepancies between them the clubs.

A grand jury that was convened in Waco to consider charges against the bikers who were allegedly criminally involved in the deadly shooting melee in May of this year returned indictments for 106 of the 177 arrested. District Attorney Abel Reyna said the same jury would return later to consider charges against the remaining 71 bikers. Nine people were killed, and 20 others injured during the incident. More than 430 weapons were recovered at the scene, including 151 firearms. The charges pertain to actions by the bikers that are considered to encompass “organized criminal activity,” no murder charges have been filed. All of the suspects, initially being held on a one million dollar bail, have been released on substantially reduced bails.