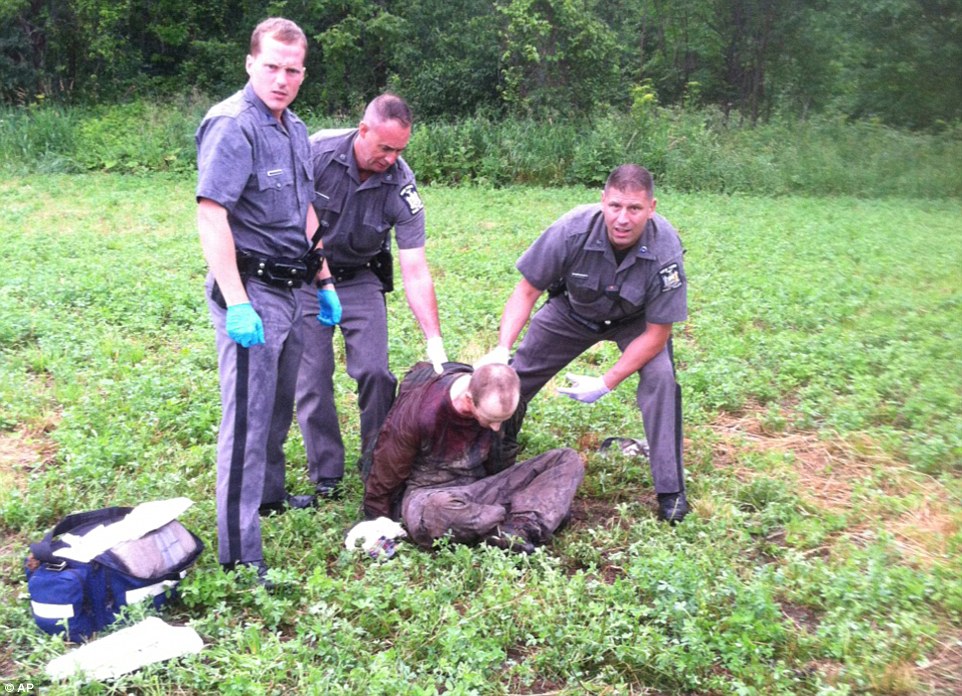 David Sweat was captured after three weeks on the run when he was spotted walking down a trail in a heavily wooded area 30 miles from the prison he escaped from. Sgt. Jay Cook of the New York State Police shot Sweat, who was apparently unarmed, twice when he spotted him. Sweat was taken to a nearby hospital where he is being treated for his injuries. Reports indicate that he is already talking with government officials about details of the escape and other internal matters within the Clinton Correctional Facility. The speculation is that Sweat, by cooperating with the police, is attempting to improve his otherwise dim prospects of serving a life sentence in virtual isolation. Sweat was serving a life sentence without the possibility of parole at the facility, for the first-degree murder of Broome County (New York) Sheriff Deputy Kevin Tarsia (36) on July 4, 2002. The details of the murder were at the onset clouded because of a court order sealing the files of the murder that not only involved Sweat, but also two other accomplices, Jeffrey A. Nabinger, and Shawn Devaul. Following the commission of a burglary of a business called “Mess’ Fireworks”, some weapons were stolen and loaded into a truck they drove to “Grange Hall Park” around 3:30 a.m., in Kirkwood, New York. The plan was to transfer the guns into a car Sweat had previously placed there. Tarsia, for unknown reasons, happened to drive his patrol car into the park and apparently surprised the three; he was shot in the belly, twice in the face and run over by a car and died. Sweat and Nabinger were indicted for first-degree murder in August of 2002. The state was seeking the death penalty.  However, there were some difficult evidentiary issues in the cases; Sweat had invoked his right to counsel at a critical point during his interrogation, and then reinitiated a continuation of the questioning process; there was a real possibility that evidence secured during this second stage of questioning, after his invocation of his right to counsel, violated New York law. Moreover, if the police used this potentially illegally obtained evidence to support probable cause averments in subsequent search warrant applications, that evidence might be suppressed as well. The two pleaded guilty to murder and a sentence of life without the possibility of parole in order to escape the death penalty (New York had the death penalty in 2002). Devaul cooperated with the state and pleaded guilty to a lesser weapons offense.

BURNING AT THE STAKE STILL LEGAL?