TRUCK MOWS DOWN HUNDREDS OF BASTILLE CELEBRANTS– AN ACT OF TERRORISM

THE FBI HAS BEEN WARNING ABOUT THESE TYPE OF ATTACKS FOR OVER TWO YEARS IN THE U.S.

The driver of a large white van truck plowed through a large crowd (roughly 40 thousand) watching the annual Bastille Day fireworks on the promenade in Nice on Thursday.Witnesses say the driver, who has since been shot and killed by French police, accelerated rapidly as he guided the front and undercarriage of the vehicle towards the unsuspecting onlookers smashing them on the pavement. People either fled for their lives or looked on in complete horror. Bystanders estimated the speed at 25 to 30 MPH for over one-half miles. The death toll is at 84 and is expected to rise. A video of the truck shows the devastation. There was substantial planning by the terrorists. 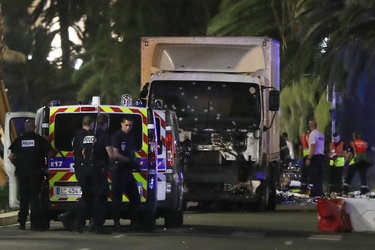 A vast arsenal of weapons, including guns, explosives, and grenades was found in the truck. The driver initially sprayed members of the crowd with a rapid-fire weapon.

The FBI has been warning about these particular kinds of attacks for the past two years in the U.S. Moreover, barriers permanently fixed around certain federal buildings have been the norm since the Oklahoma bombing attack. The goal of ISIS has been to kill as many people as possible in all terrorist attacks whether they are ISIS-directed or inspired by the group.

SUPREME COURT JUSTICES SHOULD BE REQUIRED TO RUN FOR ELECTION

Wyoming voters should vote Liz Cheney out of office; She is…

Predictions of the verdicts in the George Floyd trial: we…