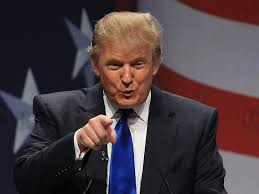 Donald Trump’s shock jock style has earned him ratings in some circles in part, because he is saying offensive things that others believe, but are too frightened to openly aver, and also because he is the king at espousing timely knee-jerk solutions to inflamed and emotional issues. An example includes his reaction to the rape and beating of a 30-year-old woman who had been jogging in the 840-acre Central Park in New York. The beating and rapes were especially brutal; she was found wearing only her bra, with her hands bound, while she lay bleeding in a puddle. Five “youths” were eventually arrested for the crime, but as the New York Times reports:

[“The rape and near-murder in Central Park rocked New York in the midst of the 1989 mayoral race, becoming a chilling symbol of a city seemingly out of control. Over time, it also came to represent the flaws in the criminal justice system. Five young, black men who were arrested and imprisoned for carrying out the attack, known as the Central Park Five, had their convictions vacated years later after another man, Matias Reyes, confessed to the crime. “]

Trump had taken out an ad shortly after the brutal crimes had occurred which stated, in part, “Bring Back the Death Penalty” and “They should be forced to suffer and, when they kill, they should be executed for their crimes. They must serve as examples so that others will think long and hard before committing a crime or an act of violence”. Even after the five boys who were charged and convicted, were later exonerated when DNA evidence proved they did not commit the crime, and someone else confessed (and his DNA matched the crime scene evidence), 13 years later, Trump never apologized for calling for the death penalty for the young men. But that’s how Trump works, he hits when the emotional irons are hot to create maximum hysteria, and when the waters have cooled, he moves on to another perceived crisis- all the while trying to focus attention on him. He never offers any real solutions, but that isn’t his game- he only wants the public eye- sensationalism and above all, power. There was a time when character, and what it means to be a decent human being, consumed the careers of philosophers, now with Facebook, Twitter and the rest of the social media outlets, loose and simplistic catchphrases trump decades of reasoned thought. Of course Trump knows all of this. His problem, however, is that much of the social media is critical of his views, but that is not as much of a problem as it seems. The silent majority of conservative voters do not take to the social media- they remain still. In reality, they may be thinking the same thoughts Trump is vocalizing, they just do not say it. This very concept is pervasive in race relations in general. But even silent types need to be stirred into thought (and action) – Trump clearly knows how to do this.